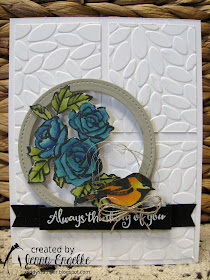 Hello stampers!  It's sketch week at Create with Connie and Mary.  You might have noticed that the Create with Connie and Mary challenge site has had a bit of an update.  You'll also notice that the challenge sketches have been updated too!
I used Global Design Project challenge #132 Case the Designer to help me with my CCMC design team card this week.  The cased designer is Stesha Bloodhart.  I actually happened to have these roses and the bird laying around on my desk already colored and cut out.  I was playing around with this set {Petal Palette} about a month ago and trying out different colors.  They were absolutely perfect for a Stesha case!  The stitched circle was also a cast off that had been laying on my desk for a while.  AND, would you believe the banner was yet another already done piece that had not been used on a previous project?!  With all of these elements already done all I had to do was cut my white cardstock and emboss it with the Petal Burst EF.  I also added a bit of silver thread behind the bird and some linen thread in the form of a bow to tie in the neutral Sahara Sand circle. 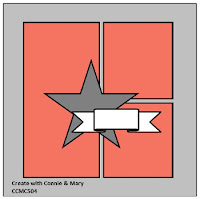 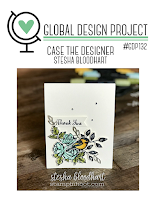 It's really hard to see in the photo but there's a little sliver of Sahara Sand scallop trim under the black banner.  I punched it with Decorative Ribbon border punch. 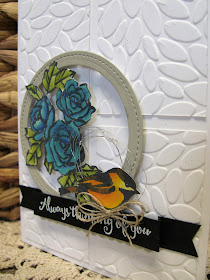 Make sure to hop over to the CCMC blog and check out the other designers!
Thanks for taking a peek and have a blessed day!
Jenny